Method to the Madness

sbt-ethereum intends to make interacting with, customizing, and deploying Ethereum smart contracts more “accessible” to non-developers. But, at first glance, it might seem bizzarely complicated. First, of course, it’s old-school. It’s a terminal-based application rather than a GUI-style app. But even beyond that, it has zillions and zillions of really long, weirdly named, impossible-to-type commands. How is this supposed to be “accessible”?

But there is some method to this madness. Once you master a few tricks and regularities, the apparent complexity becomes easy to manage.

While working with these docs, use the page tables of contents!

In the bottom of the left column of these docs, for every page, there is a page table of contents. 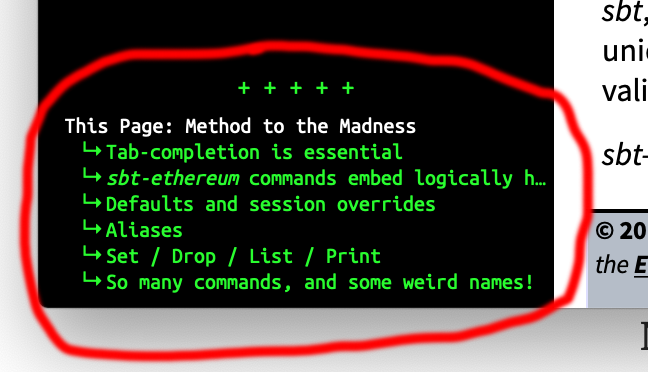 You’ll find navigating this documentation much easier if you get into the habit of glancing at that!

On the bright side, the names are pretty descriptive! You don’t need to memorize what terse incantations like jzn or kxl do. Commands in sbt-ethereum look more like ethContractAbiDefaultSet, which does give some clue. Kind of. (See below!)

But you really, really, don’t want to type out long names like that.

sbt, the platform on which sbt-ethereum is built, offers tab completion. You can type the first bit of a command and then hit the <tab> key. If there is a unique completion, or even partial completion of the command, sbt will fill it in for you. If not, it will present for you a list of commands that might validly complete what you’ve started, so you can add a bit more.

You want hitting <tab> a lot to become muscle memory.

With just a few exceptions, sbt-ethereum commands begin with eth. Beneath eth are the following “submenus”:

Note that none of these “submenus” share the same first letter. That is by design. You never have to type more than one capital letter before hitting <tab> as you “navigate” this command hierarchy. If you want to look up the balance of an address (in Ethereum’s native cryptocurrency “Ether”), you just type

The same is true for very long commands. To type ethContractAbiDefaultSet, it’s just ethC<tab>A<tab>D<tab>S, or ethCADS with some twitches towards tab interleaved.

To interact with Ethereum smart contracts, a lot of stuff has to get set up. There needs to be a “Chain ID” and “Node URL” defined. Usually, you’ll also want to have a sender address configured, and an “ABI” associated with the smart contract you mean to talk to. (An ABI is basically a description of how applications, including sbt-ethereum, can communicate with a smart contract.)

For all of these configurable elements, sbt-etherum lets you define defaults, which get permanently stored in sbt-ethereum’s internal database. Often, you can just use these defaults, so you don’t have to mess with configuration very much.

All of the items for which defaults can be configured permit session overrides. If you define a session override, the new value you provide becomes active, but only for the rest of your “session”, not permanently. When you quit and restart sbt-etherem, the values will have reverted back to their defaults.

Examples of items with defaults and overrides include:

Some items do not usually need to be configured, because sbt-ethereum can compute reasonable values automatically. However, they have overrides for when you want more control than the default behavior would offer. These include;

Never try to type an Ethereum address! It’s way to easy to screw up, and if you send value to a bad address, it’s lost forever. You can copy, paste, and then carefully verify addresses, but that gets tiresome. So sbt-ethereum encourages you to define more natural address aliases that you can type (almost) wherever sbt-ethereum expects an address.

Similarly, in more advanced scenarios, it is sometimes useful to be able to refer to contract “ABIs”, which are descriptions of how an application can communicate with a smart contract. sbt-ethereum permits aliases of these as well. ABI aliases begin with abi:. There are also some standard ABIs defined, such as abi:standard:erc20.

For both configurable items (both defaults and overrides) and for aliases, sbt-ethereum adopts a consistent set of conventions for accessing and manipulating values.

So many commands, and some weird names!

If you start with seven configurable items, each of which can take default and override forms, and multiply that by the four conventional subcommands (Set, Drop, Print, List), you get 56 commands. Add the conventional subcommands for the aliases and you get 8 more, to 64. That’s an overestimate — not all the seven configurable items accept defaults, not all are listable — but hopefully you can begin to understand why there are so. many. commands.

Commands sometimes have weird names in order to ensure that you never have to type more than the first, capital, letter of a segment. For example, there is a command called ethAddressAliasCheck that basically looks up the address associated with an alias. It might have been more natural to call this command ethAddressAliasLookup, but that would have collided with ethAddressAliasList — typing ethAddressAliasL<tab> would have remained ambiguous. Check was chosen in place of Lookup after ethAddressAlias to prevent this ambiguity.

© 2021 Machinery For Change LLC — This software provided without warranty to the extent permitted by applicable law under your choice of the Lesser GNU Public License, v.2.1 (LGPL) or the Eclipse Public License, v.1.0 (EPL)]